Note: this post ran away on me, and there are still so many aspects not covered or elaborated on.  Hopefully this will provide a general idea of where the two sides stand on captivity, however.  Feedback is more than welcome!

The world is not black and white, and yet the debate surrounding captivity seems to have been split into two extremes: “pro-cap” and “anti-cap” are two terms often used on social media. Far too many view the issue in black and white terms, but as someone once said, “the only thing black and white are the orcas”.  That said…

“Antis” tend to be against ALL zoos and aquariums – period– believing them to all be equal.  Many antis are against pet ownership and service animals as well, as they view ALL human-animal interactions as slavery (“don’t shop, adopt” and breeder-shaming are part of a larger plan to do away with domestic animals – see a collection of quotes here).  With that, it might be easy to assume that “pros” support rounding up all animals and throwing them in cages so we can mock them. This is simply not true, despite what the antis often claim.

Simplified, to be pro-captivity is to see the benefits of having animals in human care. We see the shades of grey and look at the big picture.  We acknowledge the powerful human-animal bond across a plethora of species, knowing that if it is removed, apathy will prevail in this increasingly disconnected world.

Contrary to anti-cap belief, pro-caps are hugely in favour of animal welfare, and know that not all zoological facilities are created equal.  While one may be exceptional, another just a few kilometers away may deserve to be shut down. While one may have the facilities and expertise needed to house a particular species, others don’t and should re-locate their animals to those who do (or build better habitats).  Some have amazing conservation initiatives, while others have none.  Many facilities even have rescue and rehabilitation programs in place, and what they learn from caring for captive animals helps them better care for sick and injured wildlife so that it can be re-released.

As Baba Dioum famously said, “In the end we will conserve only what we love, we will love only what we understand, and we will understand only what we are taught.” What we learn from captive members of a species can be applied towards saving wild populations, including through a newfound love of these creatures gleaned from seeing (and bonding with) individuals in a captive setting.  This is especially true in the case of children, who are the future of conservation.  It cannot be replicated through simply seeing animals on TV.  A great example of how captivity changed our view of a species can be found in the story of Moby Doll, the first captive orca to be displayed.

During a visit to the Adelaide Zoo, a fellow visitor mentioned how she was against captivity until witnessing first-hand the destruction of the orangutan’s natural habitat, and now knows zoos are necessary for the species’ survival.  During that same visit I overheard a father tell his son to take a good look at the orangutans, because if humanity doesn’t change its ways, the zoo will be the only place left to see them. Unfortunately, if the Animal Rights and anti-captivity movements are allowed to win, we won’t even have that… and it is the animals who will lose. 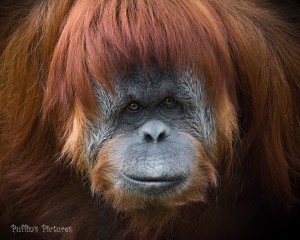 One thought on “On Being Pro-Captivity”